JYJ’s Kim Jaejoong will be holding a hologram concert in Seoul.

Kim Jaejoong will be holding his ‘2016 Kim Jaejoong 2nd Album Hologram Real Live Concert in Seoul’ on the 9th of April at the Yes24 Live Hall in Gwangjang-dong, Seoul.

The concert was first successfully held in Tokyo, Japan on the 9th and 10th of February to commemorate the release of his second full-length album, and attracted a crowd of 15,000 Japanese fans.

Filmed before Kim Jaejoong’s enlistment, the concert was the only opportunity for fans to watch the singer perform tracks from his new album. Despite being the first of its kind, the 90-minute-long concert was a perfect performance with high-quality stage production, special effects and videography, and has been applauded for opening a new chapter in K-pop history.

The upcoming Seoul concert will contain performances of tracks from Kim Jaejoong’s new album, as well as fan favorites, as a special gift for his fans.

A representative stated, “Despite the fact that Kim Jaejoong is currently in the army, Kim Jaejoong has sold 90,000 copies of his second album ‘NO.X’, and has been charting well on various domestic and international music charts.”

They continued to add, “As his Japanese hologram concert received a lot of attention, we expect there to be much anticipation and media coverage for Kim Jaejoong’s Seoul concerts. We hope fans will enjoy this special gift that Kim Jaejoong has prepared for his fans, along with his album.”

C-JeS Entertainment stated, “‘We Meet Again, Though We’ll Meet Again’, a track on Kim Jaejoong’s second full-length album ‘NO.X’, is tugging at the heartstrings of his fans. The song, which has already been translated into various languages, is like a letter full of all the things Kim Jaejoong wants to say to his fans.”

The song, which contains lyrics cherishing the time Kim Jaejoong has spent with his fans, is a beautiful ballad that layers the singer’s voice with a piano and string instrumental. The song contains sincere and heartfelt lyrics such as ‘I’ve never said that I want to leave you. You know that I’ll never be weak when it comes to us’, ‘It’s just that you’re not by my side right now. Though I know we’ll meet again, I’m sad because I can’t see you right now.’ The song has already been translated into a variety of languages, including Japanese, English and Chinese, and is tugging at the heartstrings of Kim Jaejoong’s fans.

Back when he was recording the song, Kim Jaejoong said, “I hope that my fans feel happy when they hear this song; I hope they don’t cry. If the whole album is a gift for them, then this song is like the letter that comes with the gift.”

Fans who have heard the song have reacted by stating, “It’s the song that touched my heart the most. Kim Jaejoong’s voice had me crying”, “His sincerity really hit me. The song is so full of emotion that it makes my heart ache for him”, “It feels like he’s written a special letter to us! It will help us wait for his return. Hwaiting.”

Meanwhile, Kim Jaejoong’s second full-length album ‘NO.X’ has been met with an explosive response both online and offline.

“I will accept this award as a compliment and encouragement, and I promise to work hard to create even better productions in the future.”

Kim Junsu stated, “On behalf of the 100 or so staff and cast, I would like to thank you for the award.” He continued to add, “Our performance last summer was the first time ‘Death Note’ was performed in Korea, and it was the debut production of C-JeS Culture, so this is a very meaningful award for us,” and “I would like to thank CEO Baek Chang Joo, who worked to get this production together when I expressed that I wished to do it, as well as Kuriyama Tamiya, who produced the Korean version of the musical.” END_OF_DOCUMENT_TOKEN_TO_BE_REPLACED

Despite being in the army and therefore unable to appear on broadcasted TV programs, JYJ’s Kim Jaejoong is dominating the album sales market.

On the 19th, C-JeS Entertainment revealed, “Kim Jaejoong has earned a first place nomination for the episode of KBS’ ‘Muisc Bank’ that will air on the 19th.”

Though Kim Jaejoong enlisted on the 31st of March, 2015, he was able to earn a first place nomination on a major broadcasting company’s music program with ‘Love you more’, the title track of his second full-length album ‘NO.X’. The album was prepared before he enlisted and was created as a gift for his fans.

Kim Jaejoong’s album ‘NO.X’ was released on the 12th of February, and the album showcases addictive melodies and Kim Jaejoong’s powerful vocals. The album was met with an explosive response, selling approximately 90,000 copies in a single week. It also topped the iTunes charts in 16 countries around the world when it was released. ‘Love you more’ battles against Girlfriend’s ‘Rough’ for the number one spot.

C-JeS Entertainment stated, “Kim Jaejoong’s second full-length album ‘NO.X’ was released on the 12th of February. It hasn’t even been a full week since the album was released, but it has already topped the weekly album charts for both Hanteo and Synnara, proving just how popular the singer still is. Kim Jaejoong’s album has been met with an explosive response despite the fact that the singer is currently in the military, and we expect this trend to continue.”

Kim Jaejoong’s album has topped various online music charts in Korea, as well as the iTunes charts in 16 countries, proving just how popular the singer is all around the world.

On top of the album topping various digital music and album charts, all copies of the album that were initially printed were sold out, making his entertainment agency focus on getting more copies printed to keep up with demand.

Meanwhile, Kim Jaejoong’s new album ‘NO.X’ is a special gift the singer prepared for his fans to get them through his time in the military, and has been met with a positive response from both domestic and international fans.

Last December, Kim Junsu sang for five couples at a wedding hall in Gyeonggido as a special gift.

The event was held by the Seoul Metropolitan Association of Persons with Physical Disabilities (SAPPD) for couples who were unable to hold their own wedding because of financial difficulties and disabilities.

This is only one of the many acts of charity and good deeds that Kim Junsu has partaken in, some of which include inviting NGO members to his musicals and donating to various international aid organizations.

Kim Junsu will be singing at Hwang Jung Eum’s wedding with musical actress Jung Sunah on the 26th. All three are currently signed with C-JeS Entertainment. 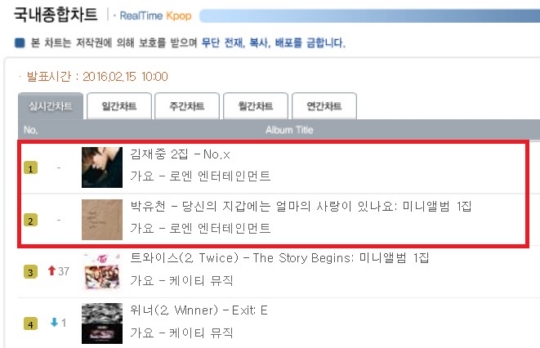 According to C-JeS Entertainment, “Kim Jaejoong and Park Yoochun took the top two spots on Hanteo’s real-time album sales charts today (15th, 10am). They were able to do this, despite the fact that they are both in the military, because of the explosive response they’ve received from both domestic and international fans.”

Kim Jaejoong released ‘NO.X’ on the 12th and it is an album that includes 12 tracks of various genres that showcase Kim Jaejoong’s charm and color. The album dominated online and offline charts as soon as it was released, receiving love from all over the world.

Park Yoochun’s first solo album ‘How much love do you have in your wallet’ was released on the 18th of January and is still charting at the number two spot on Hanteo’s real-time charts, showing just how popular the star is.

A representative of the music distribution industry stated, “We were surprised by just how explosive Kim Jaejoong and Park Yoochun’s popularity is despite the fact that they are both in the military and not active in the industry. Both albums are extremely meaningful, both for the singers who left the albums as presents for their fans, as well as for their fans who have responded extremely positively to the gifts.”