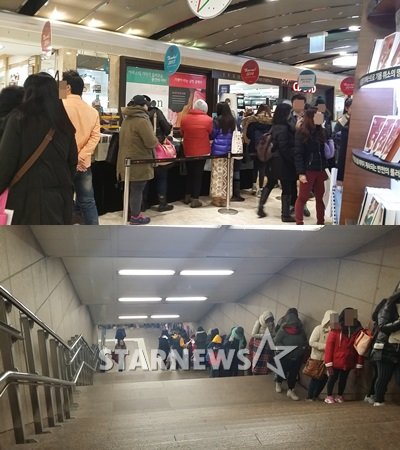 TVXQ (Max Changmin, U-Know Yunho) have made their comeback with the release of their 7th album ‘TENSE’, and the long line that formed at the Jongro branch of Kyobo Books drew the attention of everybody walking by.

This branch of Kyobo Books was set to sell 200 limited edition copies of TVXQ’s CDs that were signed by the members themselves, and fans who heard the news flocked to the venue to stand in line. From people who had started lining up on the 5th, two days before the release, to people who had just gotten in line, it was truly a sight to see.

The CDs contained just one signature from one of the two members, chosen at random. This element of mystery had the fans even more excited to get their hands on the CDs.

Hundreds of people lined up in front of the store, with the line winding down into Gwanghwamun Station. Fans who held numbered slips in their hands looked excited as they waited for their turn.

A student who was at the front of the line at 10:10am said, “My number is in the 80s, and I heard that the person who was first in line came here as soon as she heard the news. I’m so glad that I get to buy a CD.”

The fan who held the number ‘200’ in her hands said, “I came here thinking that I wouldn’t get it, but I got lucky.”

Fans who received numbered slips entered the venue to grab one of the 200 signed CDs. Fans who were unable to get a number bitterly looked on as they said, “We’re waiting, just in case,” and “An opportunity might come our way.”

Those with signed CDs in their hands looked ecstatic. One fan said, “It was a fierce competition to get one of these. I got here at 4am and there were already more than 50 people here. I’m so happy to be getting this CD.” It was easy to see fans clutching their CDs, shouting “Awesome!”

One girl, who brought her parents along to buy two CDs and get both Max Changmin and U-Know Yunho’s signature, was unable to hide her happiness.

International fans could be seen in line as well. Many of them were of Asian descent, coming from China and Japan. They, too, were unable to contain their happiness, shouting and screaming as they held their CDs.

Some of them could be seen exchanging signed CDs with Korean fans. Though they didn’t speak the same language, they used gazes, hand gestures and movements to get their favorite member’s signature.

A fan who left the venue with a signed CD in her hands said, “I wonder if their song will be available at karaoke rooms now. I want to go sing it.”

A representative of Kyobo Books was unable to hide his surprise at TVXQ’s immense popularity as he stated, “The numbered slips were all passed out early this morning.”

Error: Twitter did not respond. Please wait a few minutes and refresh this page.