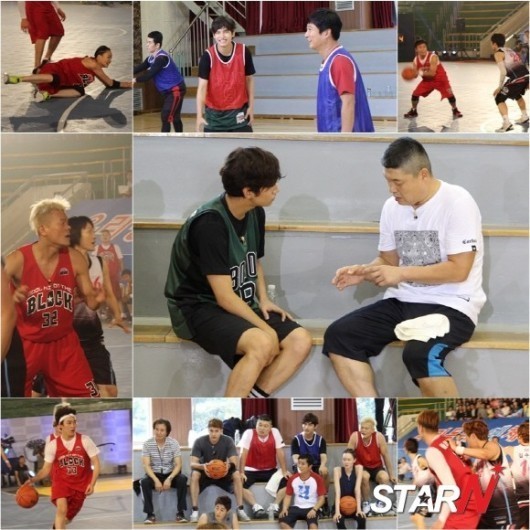 Behind-the-scenes photos for the basketball season of ‘Our Neighborhood’s Master’ have been released.

On the 29th, KBS 2TV’s ‘Our Neighborhood’s Master of Variety and Sports’ released some behind-the-scenes photos of the celebrities interacting with each other outside the basketball court.

The photos show Kang Ho Dong showing Max Changmin his bruised and swollen fingers to Max Changmin with a serious expression on his face, making it look like Kang Ho Dong was trying to gain sympathy from the younger star.

Lee Hae Jung could be seen fighting off physical attacks from the opposing team members that swarmed around her like bees, while John Park showcased his competitiveness with hair that seemed to shoot for the stars.

Not only this, but Lee Soo Geun flying around the court proved that ‘passion is more important than height’ by not letting his short height bring him down. Julian Kang and Park Jin Young could be seen keeping their focus on the ball, despite the defense strategies of the opposing team.

The behind-the-scenes photos are enough to show just how passionate the celebrity team is on the court, and it makes people curious to see the results of the competitive battle between the two teams.

Meanwhile, the first basketball match of ‘Our Neighborhood’s Master of Variety and Sports’ will be aired on Tuesday at 11:20pm on the show’s 30th episode.